Times Square Design Lab (TSqDL), now in its second year, is a design initiative that brings new ideas for public space onto the Broadway Plazas during the celebration of NYCxDESIGN. This year, solutions for seating, signage, storage, and more will appear on the plazas — including new designs, designs that have been altered from their appearance last year, and even one restored design first created in 1966. These innovations by designers Joe Doucet, Victoria Milne for 6¢ Design, Saša Mächtig, Louis Lim, Doug Fanning for DYAD, Brad Ascalon, and Hive Public Space embody New York’s creative spirit and provide unique solutions for an improved pedestrian experience in the destination that boasts 350,000 to 450,000 visitors a day.  Times Square Design Lab is curated and produced by Victoria Milne, 6¢ Design. 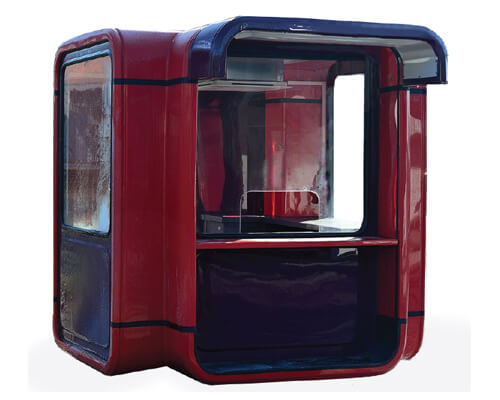 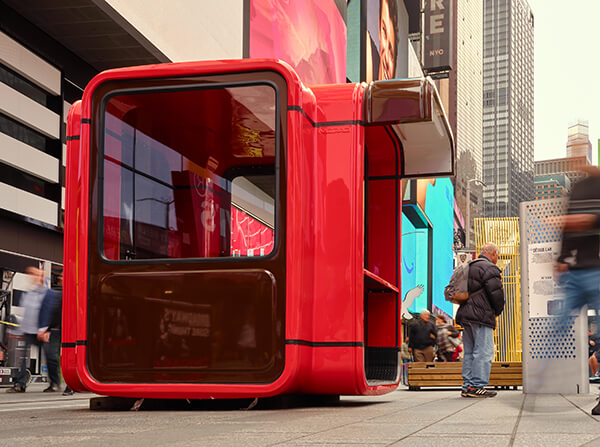 Saša Machtig's K67 Kiosk first debuted in 1966 in what was then Yugoslavia. The time-tested, mod-inspired kiosk can extend in modules to form groupings of connected pods. 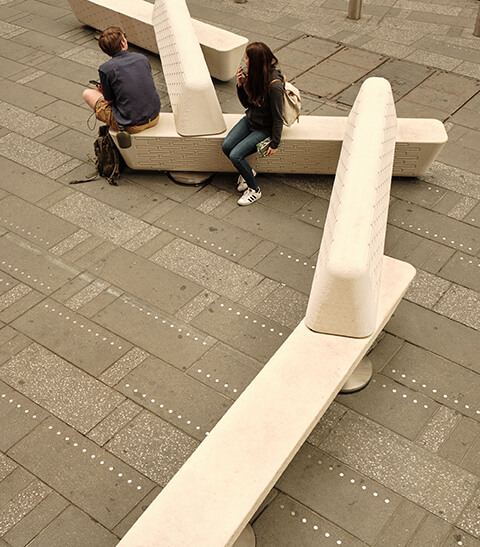 Joe Doucet's second seating concept for Times Square, Rely Bench, was manufactured with HyCoEx, a novel and fully digital production method, out of concrete with the help of Urbastyle. Appearing as a loosely-connected seating system, it serves a dual purpose as an aesthetically appealing traffic barrier. 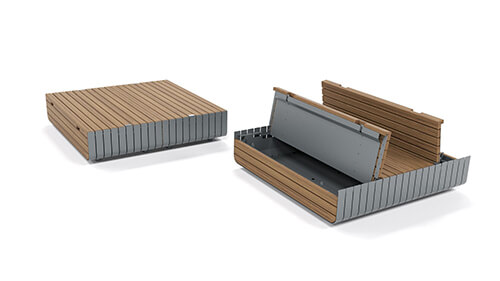 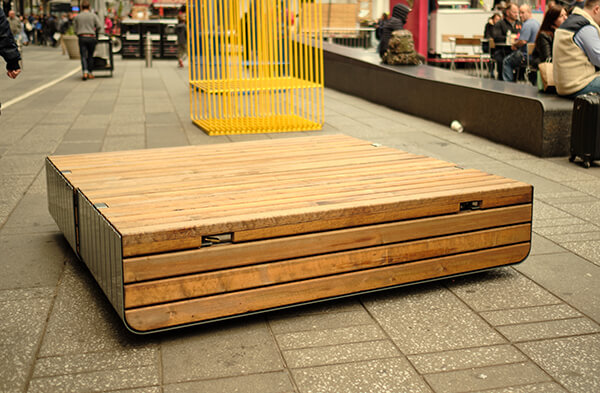 Integrating as a module with Vestre's Stripes collection, the Stripes Storage Bench can be a stage, seating, or a lounger. This prototype will be used to support the Times Square Alliance's cleaning and entertainment services. 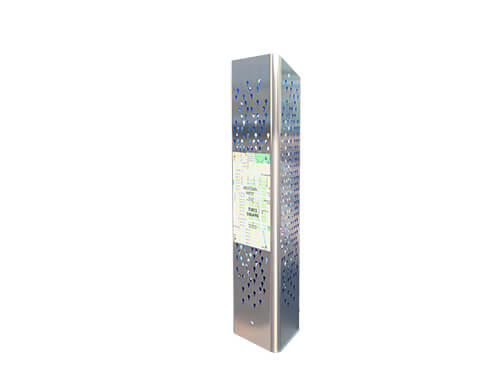 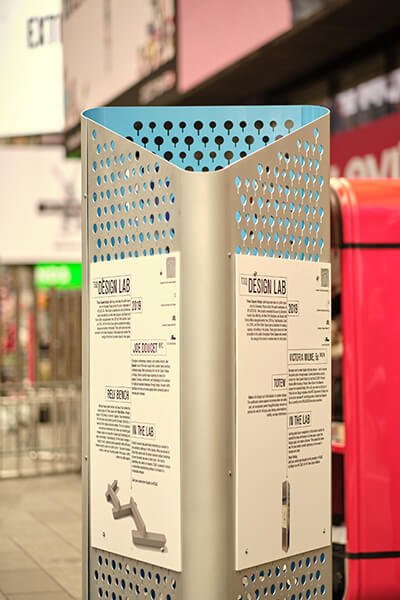 Created by Victoria Milne for  6¢ Design, Totem addresses the need for tall signage that is easily stored, maintained, and moved. Its three perforated panels allow wind to pass through and appear to shimmer when one walks by. 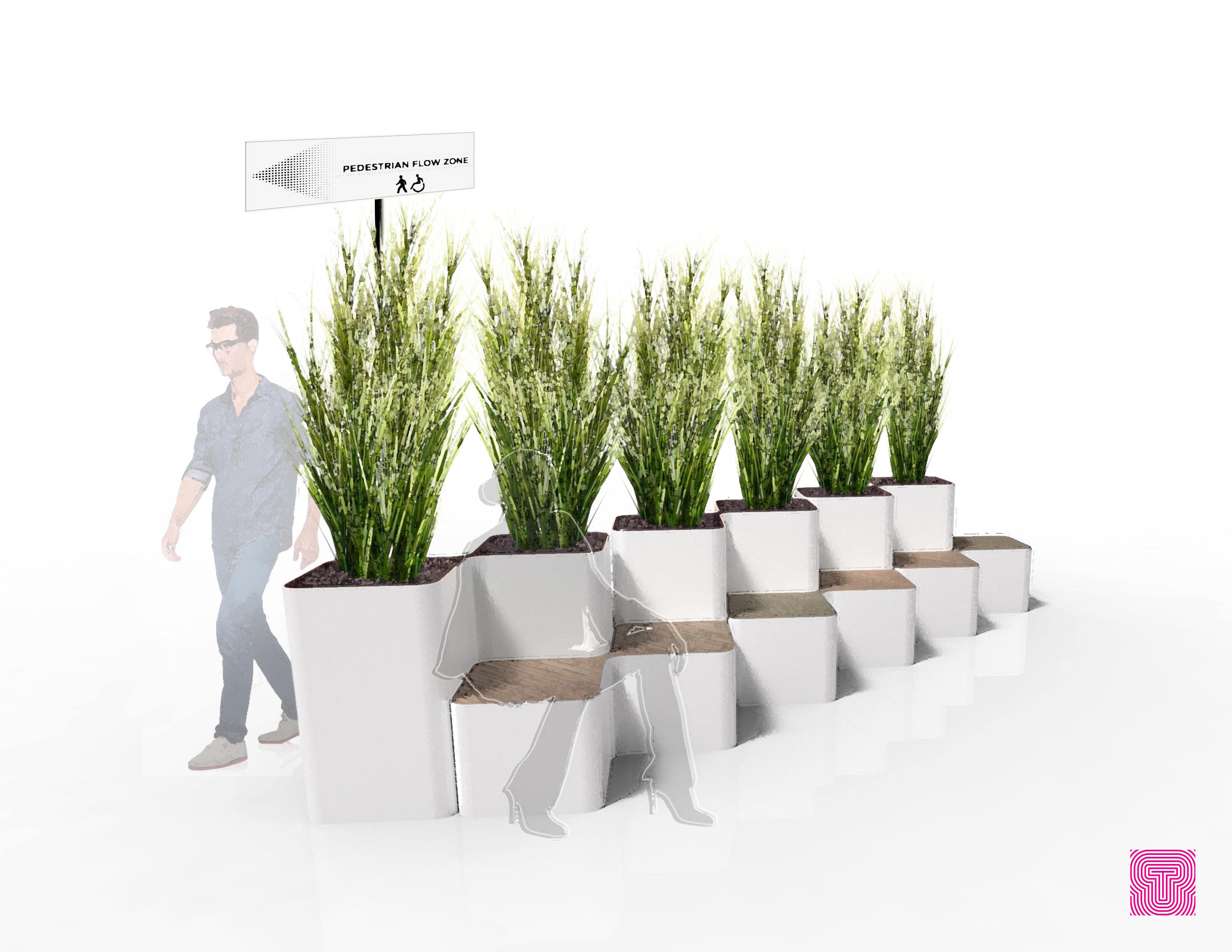 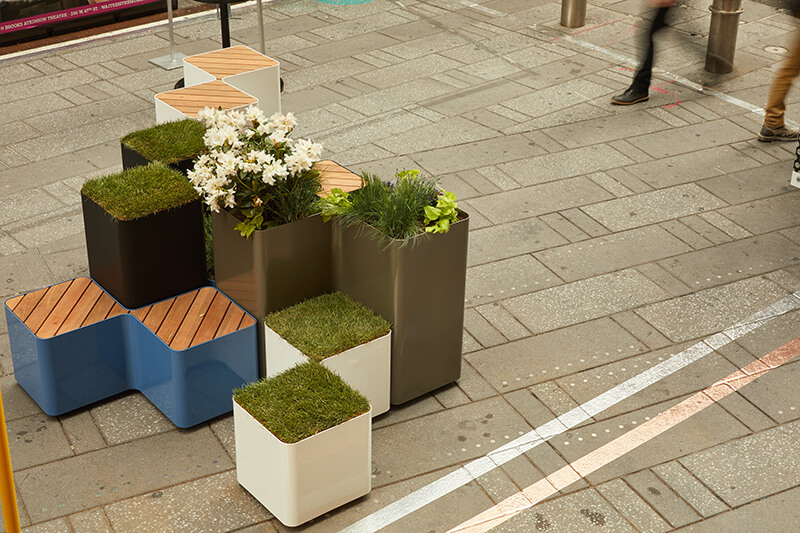 Island Collection, a seating concept by Brad Ascalon, provides a tranquil refuge through a simple yet multipurpose modular system, in which elements can be composed and rearranged as barriers, dining booths, benches, and more. For 2019, an additional storage function was added. Island Collection is now in production by Landscape Forms. 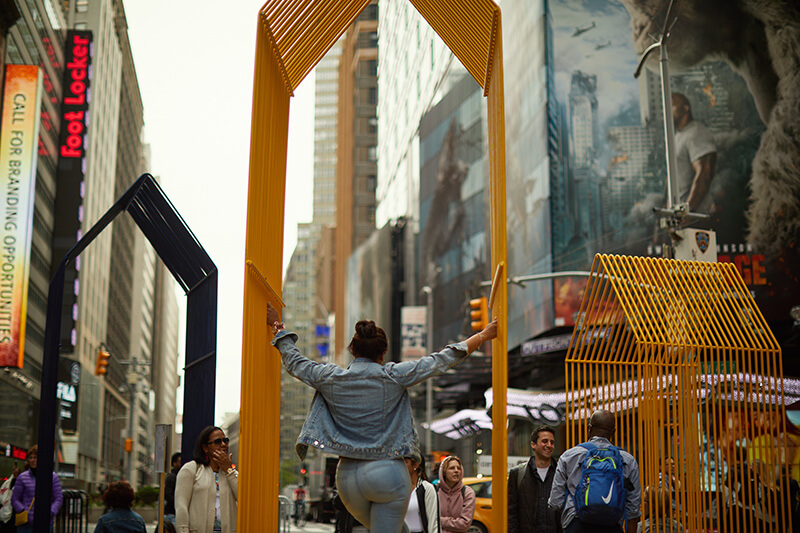 Joe Doucet's seating design, entitled The Village, is characterized by large-scale, colorful pods that foster a sense of home and congregation and provide a distinguishable landmark for familiar faces to meet on the plaza. On the plazas since the 2018 NYCxDESIGN, The Village is covered in a powder coated finish to stand up to heavy use. 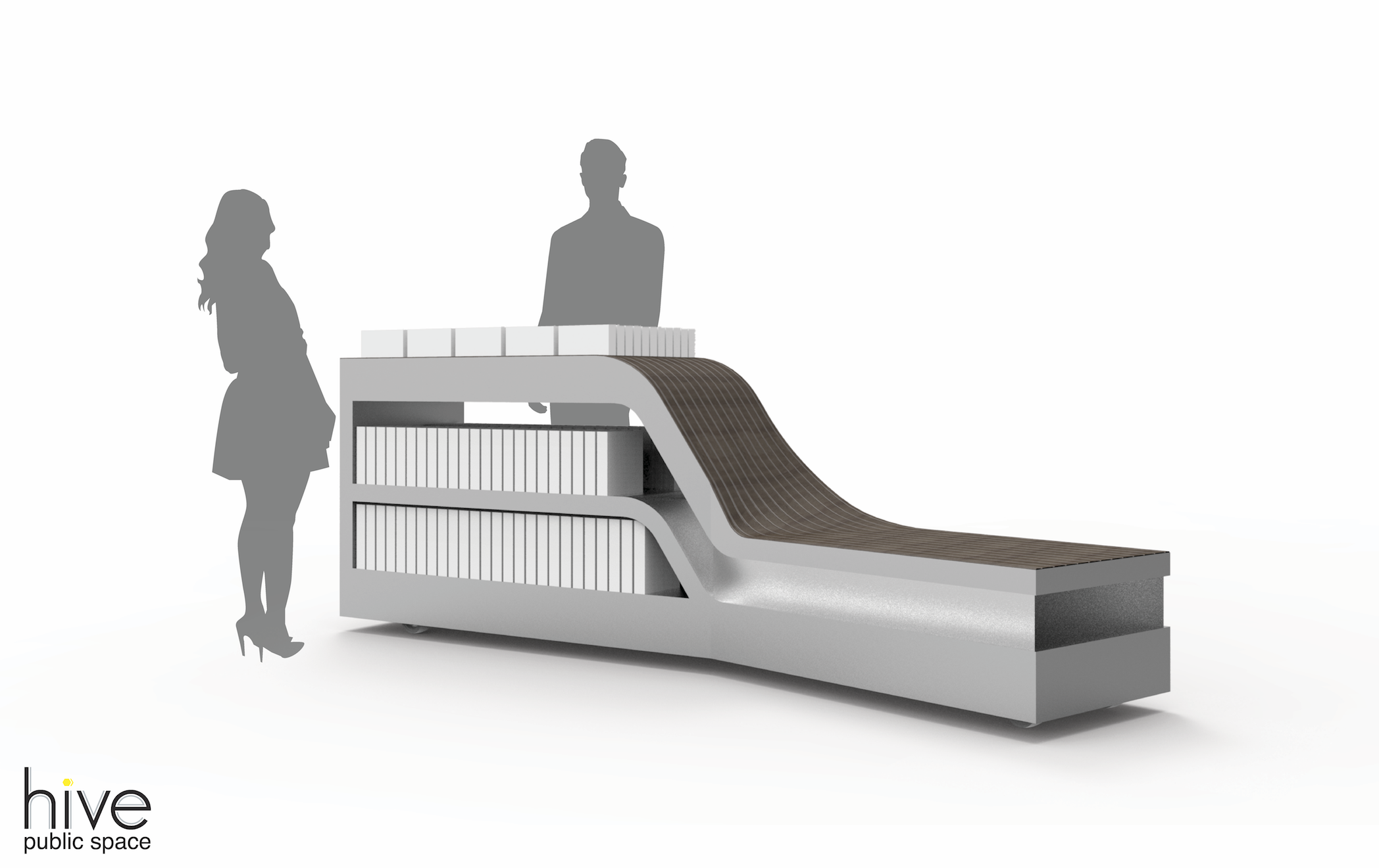 Urban design and placemaking consultancy Hive Public Space's shelving and seating solution takes the form of a curvilinear bookcase named Title Wave. This piece integrates a bench into a bookcase for the area near the Strand Bookstore in Times Square. 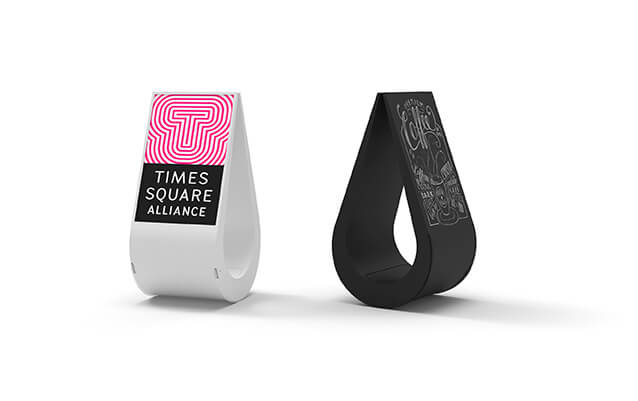 Known for his work exploring the ideas of play and interaction in design, Louis Lim designed Drop Sign, a signage system with a teardrop shape that allows it to respond to wind or touch, attracting attention as it rebounds. Since its first appearance in 2018, Drop Sign has gone from the powder coated aluminum proof of concept to a newer polymer form. 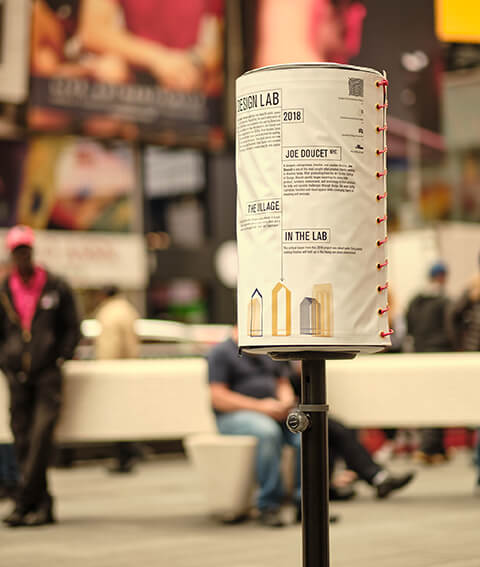 The 2019 iteration of Re: Post, DYAD's cylindrical sign-holder, goes straight to the source: no longer just inspired by kickboxing, it uses an actual EVERLAST stand to accommodate the pressure of wind and passersby while presenting stable signage at eye level.

Design Lab in the News

Time Out New York, May 11, 2018: NYCxDesign kicks off this weekend, bringing awe-inspiring works to all five boroughs