This interview was conducted and posted in Fall/Winter 2017.

25 Years of Carolines on Broadway in Times Square

This year marks the 25th anniversary of a New York City entertainment institution in Times Square, Carolines on Broadway. Carolines opened its stage to some of comedy’s most notable icons, like Chris Rock and Jon Stewart, early in their careers and continues to cultivate young comedy talent right here in Times Square. In honor of its 25th year in the neighborhood and the recent 14th anniversary of the New York City Comedy Festival, produced by Carolines, the Times Square Alliance sat down with the powerhouse behind one of NYC’s most desirable comedy clubs: Caroline Hirsch. 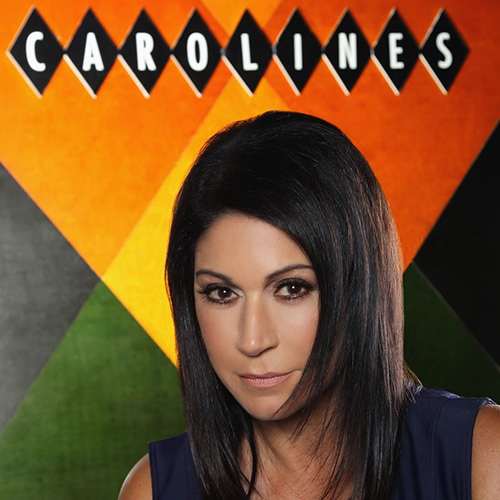 Born and raised in Brooklyn, Caroline Hirsch grew up watching The Johnny Carson Show – something that would later inspire her to open a comedy club. She always remembered how comedians on the show would announce what venues they were performing in. “I remember [Carson] saying ‘David Steinberg will be at Mr. Kelly’s in Chicago’ and as a kid that resonated in my mind because if I wanted to see David Steinberg, I had to go to Chicago to see him.”

But her career didn’t start out in the entertainment business. Caroline started out in retail and worked at Gimbels as a market representative, eyeing trends in the retail industry. “I scoured the trends that were happening in retail for the 40 other stores that were outside of the New York chain... When [Gimbels] was closing, I decided to take some time off since I had been working since I was 16 years old.” During this time, some friends of hers suggested they open a cabaret together. Caroline saw an opportunity there, and in 1982 they opened a cabaret in Chelsea. The cabaret featured a variety of acts, including performers like Chris Connor and Peter Alan as well as drag performances. Caroline and her business partners believed they could be making the venue work even better with a comedy act, and decided to hire Jay Leno.

Carolines Takes Form
At the time, Jay Leno was appearing on Late Night with David Letterman, which had just begun airing. Like the performers on The Johnny Carson Show from Caroline’s childhood, when Jay Leno came to NYC to perform on Letterman, he would announce to a national audience that he was appearing at Carolines. Said Caroline, “That was kind of the beginning of what we started with the young comedians at the time. That was followed by Jerry Seinfeld, Gary Shandling, Sandra Bernhard, so many great people who played the club. Rita Rudner was just starting out then, Bill Maher.”

Caroline recalls one of the talent agents she worked with being skeptical when she said she wanted to book PeeWee Herman. When he asked why Caroline was interested,she said, “‘Just trust me. Just trust me. There’s something going on here.’ And Paul [Reubens] played the club a few times right before his first movie came out.”

Caroline moved the club from downtown to Times Square in 1992. After outgrowing two spaces elsewhere in the city, Caroline wanted a space that could accommodate the audiences the talent brought in. “This particular space is zoned for entertainment, so not anybody can go in this space. And I was here before Disney! As Susie Essman once introduced me, ‘Caroline was in Times Square before the mouse got here!’”

Immediately after she moved into her space in 1626 Broadway, the building developers went bankrupt, leaving behind scaffolding and swaths of empty spaces in the building. Caroline explained, “It was a really bad time. ... This was 25 years ago. I was one of the founding members of the [Times Square] Alliance, so I’ve seen it all change.” She noted that the expansion of digital billboards and the construction of the Red Steps and TKTS booth have all added significant value to the redevelopment of the neighborhood.

“We’ve seen everybody,” Caroline said of the comedy icons who have walked through the door of Carolines. “Jon [Stewart] started at the Seaport [an earlier location of the club] doing like a children’s show. And by the time I moved [to Times Square], his whole career was starting to blossom. Jon was an early prospect at Carolines. So was Dave Chapelle. He started working at Seaport as a 19-year-old, and then came to headline here. Chris Rock, too.” She is particularly fond of her memories of the late Robin Williams. “Robin was always a fan of the club ’cause I knew him way back when he used to stop by with Christopher Reeves.” One night, “Robin came down the steps and just sat here at the bar greeting everybody coming in. Can you imagine? It’s a Saturday night and everyone coming in and him saying, ‘Oh hi! How are you?’” Another time, Robin Williams was in the city doing press and stopped by the club to see Jeff Garling perform. “So Jeff is onstage and somebody’s heckling Jeff, and then Robin is heckling the heckler in an Irish accent. Jeff says, ‘You don’t want to be heckling that other guy. Don’t get involved there.’ And then later on Jeff introduced him and Robin got on stage and did some time.”

Caroline praised Times Square Arts, the Times Square Alliance public art program, noting that the Midnight Moment program has brought in renowned artists like Pipilotti Rist and Laurie Anderson. “I think what a lot of New Yorkers are not aware of is the public art program that takes place here. You can’t get much cooler than that, so you can’t say Times Square doesn’t have the cool factor.” She also believes the Broadway community is a unique asset to Times Square. “It’s theater. You have the biggest entertainers in the world here. You have the most creative community around here. Some people want to knock Times Square down, but you can’t knock down this community of creative people.”

For a complete schedule of events and to purchase tickets visit www.carolines.com

Find out more about Carolines on Broadway and the schedule of upcoming performers at http://www.carolines.com/.